Black Sheep Comedy’s Stand Up @ Shhh Loft is a secret stand up comedy show in Leslieville, Toronto. The location, revealed to ticket holders only, is like no other in the city. So, if you’re looking for something fun to do in Toronto – something that offers comfy seating, chill vibes, lots of laughs (courtesy of stand-up comics who have been featured on JFL, JFL42, CBC, SiriusXM and more), all in a  weed-friendly environment, look no further than Black Sheep Comedy’s Stand Up @ Shhh Loft.

Get your tickets to our next secret speakeasy event: Black Sheep Comedy’s Stand Up @ Shhh, Loft Saturday March 16th, 8pm before they sell out! Every ticket comes with a little green gift.

Need more convincing? Here are photos from our February show, courtesy of @jovi11photography! 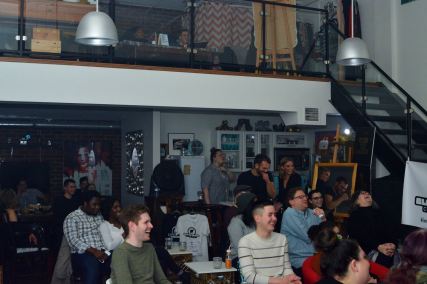 Black Sheep Comedy is committed to producing and hosting hilarious and inclusive stand up comedy events in Toronto and across the GTA, surrounding region and online. Public, private and corporate stand up comedy events are our thing! Want Black Sheep to produce and host a stand-up comedy night at your establishment? Yes, we even do the marketing! Or, do you want a killer line up at your next corporate party? Please email blacksheepstandupcomedy@gmail.com today! View more posts